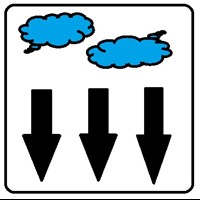 Air is used as an electric insulating medium in the construction of power supplies, and therefore affects the design. The density and strength of air are very good at sea level but needs to be compensated for at higher altitude because the air gets thinner. Since air gets thinner at higher altitude and therefore becomes less of an insulator, the components used in electrical devices have to be designed appropriately so they are fit to operate at certain locations.

The base design for power supplies is 2,000 meters. However, as mentioned before, as altitude increases, the air becomes a poorer insulator and the spacing distances inside the power supply have to be increased. Most power supplies that meet the safety standards are designed to operate at most altitudes, which can vary from slightly above sea level to as high as 2,000 meters (6,252 feet).

Let’s say that you operate at 5,000 meters instead of 2,000 meters. The clearance between the components used must then be increased appropriately. This is because air becomes a poorer insulator, and may cause a breakdown between conductor and the electronic components. Another effect of high altitude is that the less dense air does not conduct heat as well. To compensate, the power supply should have increased air flow, which is solved by the increased spacing.

Transporting electronic devices by air
Airline regulations specify that the air pressure in the cabin of a commercial airliner must not be lower than that found at an altitude of 2.438 meters (8,000 feet) and the pressure at this altitude is 75 kPa (kilopascals). Airplanes typically decompress their cabin at 1,800-2,400 meters (6000-8000 feet, >  75 kPa). Alternatively, airlines may decompress their cabin to the pressure at the altitude of their destination.

The higher the altitude of an airplane, the lower the kPa. A plane will pressurize the cabin and cargo hold to create a safe and comfortable environment for passengers, crew, and cargo at high altitudes. The pressure in the cabin is the same as in the cargo hold of the airplane because of cabin pressurization. Therefore it is safe to ship such electronic devices to other countries.

Unsure of specifications?
Some countries may be at certain levels of altitude which are outside of the products base design. For example, El Alto International Airport in La Paz, Bolivia is 4,061 meters (13,323 feet) above sea level. At 4,061 meters (13,323 feet) the air pressure is 62 kPa, which may be outside of standard specifications in power supplies.

You should check with the manufacturer to determine if the power supply is appropriate for the altitude where you are carrying out work, or if an alternate model is designed for higher altitudes is required.